Last weekend I followed my own tradition again and attended my fourth WordCamp Europe. WordCamp Europe 2017 was hosted in Paris, France. The first one was in Leiden, Netherland in 2013. Read more about me attending WordCamp Europe 2014 in Sofia, Bulgaria, also 2015 in Seville, Spain, and 2016 in Vienna, Austria. This year was over the days of 15-17 June and followed the same weather pattern as per previous years of bright blue sky and loads of sunshine.

Nails creatively in tune with the theme of WCEU Paris, by @Barnes_Fiona

Les Docks de Paris was a great venue, with amazing amount of space for talks, networking, chilling outside and especially for the sponsors. In fact, the sponsor area looked like an impressive expo on its own. The caveat to this location is that it literally ‘just outside of Paris’. One would think outside outside Paris… Instead I learned the hard way, that ‘Paris’ is within the circular Bd Périphérique. Travelling only one stop on the train, with luggage and all, to my hotel ‘outside of Paris’. Not knowing that this one stop would my ticket invalid, I was welcomed at the train station with a €50 fine on arrival.

With bad luck aside, attending WordCamp Europe, which ever city it could have been, it is always an unforgettable experience. With statistics such as 1,900 attendees from 79 countries and another 1,000 people that joined via live stream from 77 countries, to make a total audience of 2,900 participants from 92 countries. Also 15,000 tweets from more than 2,500 participants, the good and love between humans shined through.

WordCamp Europe doing things a little bit different this year, Contributors Day was before the main event. I personally thought this worked quite well to get a bit of work done, instead of trying to do so after the event, when everyone is tired.

I am still in the process of setting up with Theme Review, that I ended up spending more time at Polyglots, doing af translations. I thought with this strategy, I would be effective to shift more work for one day.

On the first day of the conference, I had to first hang out a bit in the sponsors area and visit a booths. The Tweet below is a great photo to show this impressive space.

On our way back from #wceu, having some to a few potential sponsors (not web hosts, as we have those already). We have emails to send! pic.twitter.com/a9XNL4Fofn

Then of course also filling a bag with a bit of swag. Shortly after arrival I also became the new proud owner of the adorable @Manny (ManageWP mascot).

The first talk I attended for the day, and an important one too (for everyone, because everyone use the internet), is Making Your Voice Heard: How to Win Friends and Influence Policy by Heather Burns. Listening through the talk, the importance even became more apparent. I would definitely highly recommend watching this talk, incase you have missed it. I guess I walked away feeling like I have a bit of homework to do. But hey, for the greater good, don’t hold back! See the talk here and slides here. 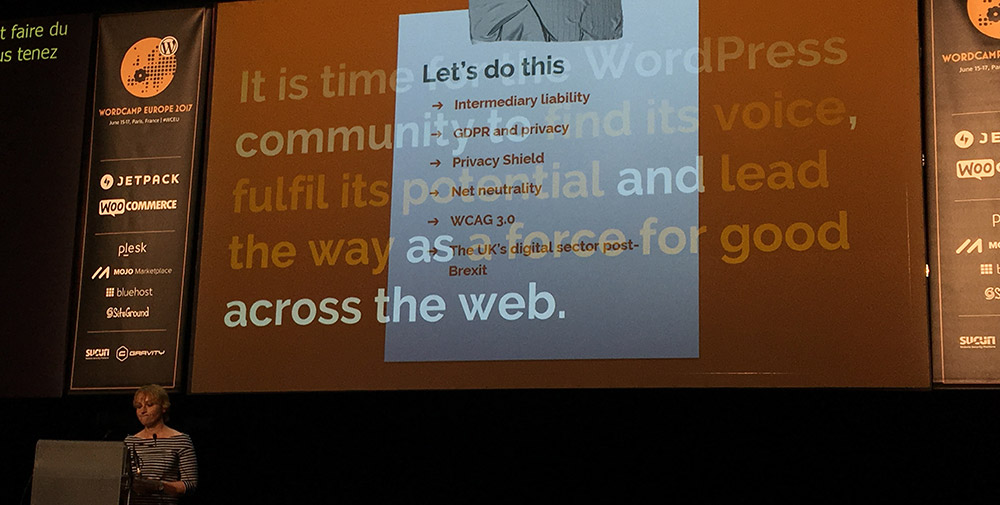 After lunch were Lightning Talks about Content by Monique Dubbelman, Dario Jazbec Hrvatin, Jen Miller, Syed Balkhi. Valuable ideas were shared regarding writing and getting your content out there.

Monique also made a Wapuu boardgame for WordCamp. I would yet like to see / play it in real life!

For #wceu, I co-created The Wapuu Game, together with @oli4rijcken
Will bring a limited no. of prints to @WCEurope pic.twitter.com/1dDPiXyMIf 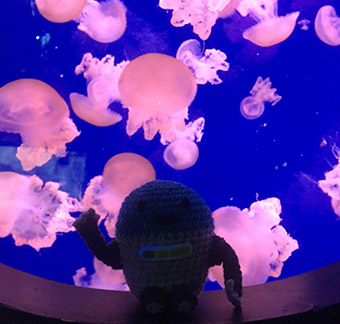 Thank you ManageWP for the invitation to the GoDaddy Pro party at the aquarium in Paris this evening. With the speeches held, it also gave everyone more insight of GoDaddy Pro’s acquisitions. And @Manny had a great time too…

The second day of the conference and no opportunity for sleeping in. The first talk, CSS Grid Changes Everything (About Web Layouts) by Morten Rand-Hendriksen is a topic that I have been following for the last year myself. In fact, it is a topic I have thought about giving a talk about too. I like the way he presented it and added some additional important resources. His slides and resources can be found online here.

Another not to be missed talk during this morning, was Accessibility in the Age of the Headless CMS by Rian Rietveld. A topic one can never hear enough of. With her informative, well researched talk, I learn something new every time. The accommodating blog post also have loads of resources, that am going through to make sure I get everything covered.

Her talk tied in nicely with the one that followed Selfish Accessibility by Adrian Roselli. Also a great speaker to see in action, and valuable slides to follow up too.

There are definitely a whole bunch of talks I’ve missed that I will be catching up from WordPress.tv this weekend – almost like having another weekend WordCamp from my lounge. Session recordings can be found here. In the meanwhile I’ve downloaded Gutenberg and giving it a testdrive.

Last but not least…

Thank you @gravityforms & @sucurisecurity for being #WCEU afterparty sponsors yesterday. There was some good partying going on, right? 😀

And a few more Tweets to give an idea of the after party! 😉

Only one more dance at the #WCEU #afterparty before I leave to #Belgrad for the next #WCEU #wapuu #getwapuu – see you all there! pic.twitter.com/w4MM8EpK4Y

Besides all the great talks, I also find it fascinating to see how creative people get and how far people go to make the event fun. From sponsors with their swag, to companies with their tv channels, @PixelRockStarHQ with their big Wappuu (a WordCamp Europe tradition now) and fun photos going all around.

The only worrying, probably a bit negative aspect I have to add is the lack of recycling. The amount of waste, especially after lunch was a real eyesore. For example from the paper bag lunch was provided in, to all the plastic containers inside, those items should (and easily can) be separated and recycled. Even better, those materials should also be sourced as recycled from materials. People using their own coffee cups and water bottels should also be encouraged at any WordCamp in general. I am hoping that this will become a real thing.

With that said and the bit of bad luck I had in Paris on my third time visiting, all the happy times and good memories is overwhelming. Thanks to all the organisers and volunteers for putting up an amazing event. Looking forward to visit Belgrade and WordCamp Europe 2018!

See you next year again!